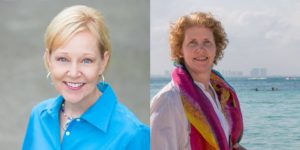 Shellie Bailey-Shah, founder of KidTripster (L) and Sally Black, owner of VacationKids.com (R), are partnering together to grow their separate businesses.

The Family Travel Association is all about improving connections, so that our combined power helps families vacation more and enjoy it more as well. Member connections can also help our individual businesses and brands grow, like the relationship between Shellie Bailey-Shah, founder and editor at Kidtripster, and Sally Black, founder and owner of VacationKids.

The December 20-27, 2019, Danube River cruise, stopping in cities like Budapest and Vienna, is hosted by Bailey-Shah.

“FTA membership opens up a world of possibilities, especially when it comes to collaboration and new business opportunities,” said Black.

This year’s river cruise opportunity had its beginnings at the 2018 FTA Summit in Bermuda. There, Bailey-Shah met Kirstin Karst, co-owner of AmaWaterways. “She and I agreed that KidTripster would produce content for AmaWaterways during the coming year,” Bailey-Shah said, including taking a Christmas Markets cruise in 2019.

Speaking later with Bailey-Shah, Black suggested selling a group tour around the press trip opportunity. “Once that opportunity was confirmed, I created a group on this same sailing and produced marketing materials that we could promote jointly,” said Black.

Black is managing bookings and other logistics for family clients reserving cabins on the December Christmas Markets cruise, while both partners are actively promoting the sailing through their respective assets, like Black is doing at VacationKids.com.

“Joining the FTA and attending the FTA Summit has been the single most important decision that I have made as the founder and editor of KidTripster, in terms of moving my business forward,” said Bailey-Shah, “As a media organization that’s always looking to introduce readers to the ‘latest and greatest’ in family travel, I’ve appreciated the opportunity to meet face-to-face with the representatives from both travel vendors and tourist boards.”

“Those meetings have turned into mutually beneficial opportunities to share their services and destinations with KidTripster readers. I’ve developed meaningful relationships with other media members and have been pleasantly surprised by their willingness to ‘pull back the curtains’ on their businesses,” Bailey-Shah said. “Rather than seeing each other as competitors, we’ve been able to cooperate and amplify the family travel message.”

Especially helpful for Bailey-Shah has been making connections with travel advisors like Black. “It’s been a win-win-win. As a media member, I’m bringing added value and content to KidTripster’s readers. As a vendor, AmaWaterways is gaining greater exposure to the family travel market. And as an agent, VacationKids is earning commissions from the group cruise.”

“None of these valued relationships would have been possible without the existence of the FTA,” Bailey-Shah said.

Black encourages other FTA members to reach out to each other to explore and experiment with opportunities that fit their individual business models.

“Partnerships like this offer extended marketing reach and additional sales for agents. Writers benefit from affiliate commissions as well as having the option of collecting additional stories and perspectives from participating families,” she said. “And suppliers have the benefit of bringing together two different types of influencers – both PR and sales.”