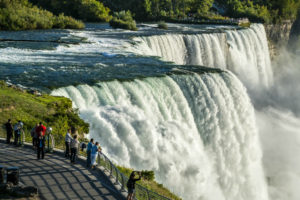 Family Travel Radio’s Aaron Schlein was live on stage at the 2019 New York Times Travel Show with Ross Levi, Executive Director and Vice President of the Division of Tourism at Empire State Development, discussing the wide variety of family-fun experiences the state has to offer.

The great thing about New York State’s vacation offerings, Levi said, is that “most people just take a car. You don’t have to plan a year ahead of time, sometimes maybe just a few days, and still have an amazing experience,” he said.

Levi took the audience on a virtual “Family Road Trip,” from Long Island, up the Hudson River, to Western New York and Niagara Falls, stopping at places like the Rhinebeck Aerodrome, a Hudson Valley World War I aviation museum, to the Skyrider Tour at Hunter Mountain, the longest and highest zipline in North America, and second highest in the world.

Many families are likely not aware that the Adirondacks are part of the largest state-protected lands in the lower 48 states, Levi noted, large enough to fit the Yellowstone, Grand Teton and Grand Canyon parks all within its borders.

Levi also introduced Aaron and the audience to places like the recently opened National Comedy Center in Jamestown, New York. The interactive museum, featuring multi-media displays of a variety of comedy films, television shows and other laugh-filled programming, is located in Lucille Ball’s hometown.

He ended the trip at the iconic Niagara Falls, and described how it is a perfect example of the singular memories that await families throughout the state. “The thing that really makes us strong for families, is the uniqueness that we have. There is no other Niagara Falls in the world,” he said.

Levi encouraged families at the show to see vacation opportunities as broad and accessible as New York has to offer, estimating that 70 percent of his favorite memories were “away from home, exploring something new” with family and loved ones.

“I remember getting in the car and driving together. And when mom and dad explained to me where we were going, I would moan ‘oh great.’ But then you got there, and had these amazing experiences you never expected to have,” he said.

As Executive Director, Levi manages all New York State tourism staff, coordinates efforts with the state’s regional Tourism Promotion Agencies, and collaborates on all I LOVE NEW YORK marketing initiatives. In addition, he works closely with NYS Tourism Advisory Council, which provides input and advice regarding the state’s tourism efforts.